I am a great fan of both +VIVOBAREFOOT and +sugru .

I will write more on my experiences with minimalist shoes, but I have now acquired a number of pairs of Vivobarefoot's shoes and love all of them.

The one problem pair were the Vivobarefoot Ra (Blue, canvas) - look good, can be worn to work(although the white sole is definitely "business casual"), but after a while the heel rubbed on the edge.

I am happy to report that a "smear" of blue sugru around the rear edge of the shoe seems to have done the trick; it was tested by the local Xmas disco!
Posted by kbm at Sunday, December 23, 2012 No comments:

The future of Emacs and humanity

"But ... Emacs will still be there, waiting. It will be there when the icecaps melt and the cities drown, when humanity destroys itself in fire and zombies, when the roaches finally achieve sentience, take over, and begin using computers themselves - at which point its various Ctrl-Meta key-chords will seem not merely satisfyingly ergonomic for the typical arthropod, but also direct evidence for the universe's Intelligent Design by some six-legged, multi-jointed God." Kieran Healy

Hilarious and insightful! Personally I think it will be some form of octopus that inherits the earth, but tellingly a mutated version of the last line will still apply. 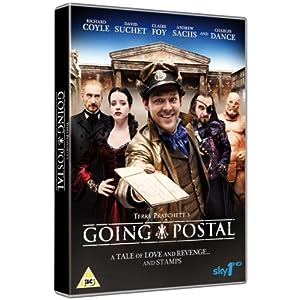 Terry Pratchett Going Postal: I just bought the Blue ray of this and got round to watching it last night.  And I very much enjoyed it !

I have read and liked many of the books: The Colour of Magic had me LOL which is rare for a book.  But I only "quite enjoyed" the TV films of  Colour of Magic and The Hogfather.  Great cast, super production values, but not Really Funny(tm).  Quite Funny(tm).

Going Postal had a great cast, great production values, great timing ( except perhaps the ending was a bit rushed).  David Suchet was splendidly evil!.  I thought that Jeremy Irons could not be bettered as Lord Vetinari, but Charles Dance was great ( and had a very prominent part cf. Colour of Magic). Clare Foy ("Little Dorrit" says my wife) as Adora Belle Dearheart and  Richard Coyle as Moist Von Lipwig(!) were also superb.  Tamsin Greig, Steve Pemberton - the list goes on and on!


So I hope this met with commercial success so that other Discworld novels will be brought to our screens.
Posted by kbm at Wednesday, April 04, 2012 No comments:

I am still enjoying Gnome 3.  However, issues ( I think with my ATI driver) on my home machine have led me to upgrade to Ubuntu 12.04 (alpha!).  This has gone very well, and seems very reliable - I hpe it stays that way.

One thing that I am missing is having the "hot corner" duplicated on a second screen. In fact i would like the top bas also duplicated on the 2nd screen! Any pointers welcomed.
Posted by kbm at Tuesday, February 14, 2012 No comments: